at the new Gallery in New York. Sometime after this exhibition I sold a number of drawings to Art dealers, art collectors, as well as to fellow artists. This gave me the necessary funds to work at my art [ord overstreget] for quite a few months. But, as soon as funds became low, and as soon as I began to feel [overstreget ord] the least encroachment upon my independance as an artist, I decided to return to the sea again.

In the spring of 1932 I exhibited at the Salon des Tuilleries. In autumn of 1932 I joined l'Association des Surindependants with whom I have exhibit annually ever since. I have [ord overstreget] exhibited alone in Gallerie Pierre, Paris, in 1934, in Galerie Alfred Poyet, Paris in 1937 and in Gallery Guggenheim Jeune, London, in 1938. [ord overstreget] I have also shown my work in group exhibitions in museums and art galleries both in Europe and America. 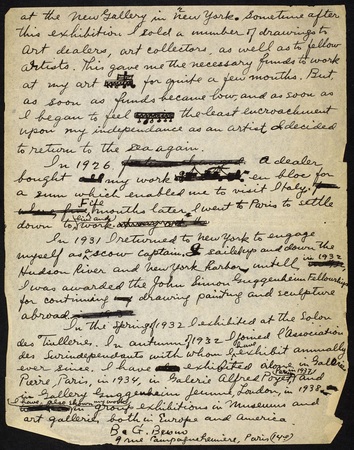